Back to the Wheel and Hand-building Boards

I tend to bounce back and forth between hand-building and throwing on the wheel. There seems to be three camps of potters, at least among those who I interact with at my studio. Some stick only to the wheel, others only to hand-building. I fall in to the third camp, and tend to bounce between.

Each has something that I can't easily get from the other. The wheel has a especially meditative feeling for me. The downside being that if I'm feeling unbalanced on a particular day, I can just say goodbye to trying to get anything centered. With hand-building, I can be architectural in a way that isn't as easily possible on the wheel.

Just like Captain Planet, when the powers of hand-building and wheel work combine you can really start having some fun. Like in one of the dishes I have drying now - I threw the sides on the wheel, then elongated it into an oval and added a bottom. The sides have the slopey elegance that's harder to accomplish only with slabs, but the overall shape of the piece is one that is impossible to naturally throw on the wheel. 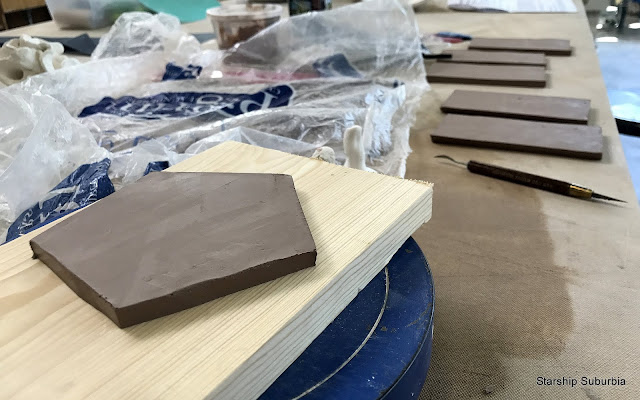 This is assembled and drying right now. Any guesses?

I also put in some work on the wheel this morning. For the past few months I've been working primarily with Fire Clay, in contrast to the MB I had been using previously. Fire Clay has bits of iron so it has a redder, more speckled surface when completely fired. The speckling shows through many glazes, creating a more rustic, varied look. It also has more grog in it, so it's rougher feeling when thrown, but it is more willing to move into interesting shapes.

In comparison, MB is a stoneware/porcelain mixture, so while it doesn't get as pure white when fired, it looks similar to porcelain at the end. It's less forgiving of overwork, though, so you don't have as much time to get it where you want it. However, it's a lot smoother on the hands! 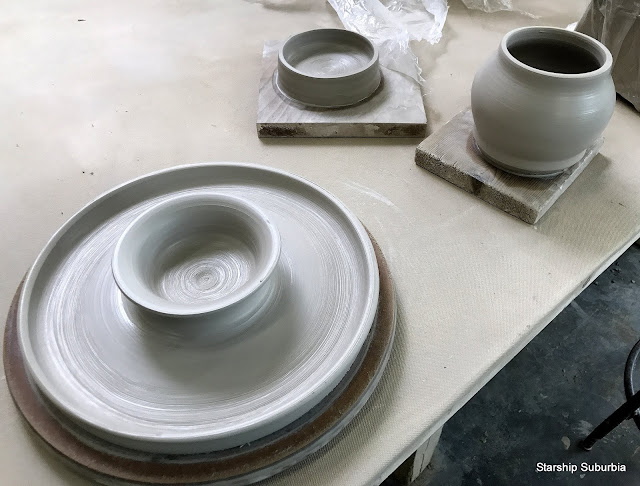 Here's part of what I did this morning. Not shown is the first pot I did - it met with a series of errors, so it's not quite as nice as it was when first finished. I managed to nick it with a fingernail, then had problems convincing it to come off the wheel. I'm thinking it will be a great opportunity to play with some decoration idea.

Otherwise, I have a cake platter and a covered jar up above. These are all fairly fresh off the wheel. It's a humid day here (plus a threat of rain), so I was keeping them inside. The shinyness is an indicator of how wet they all are. I had to hit them all with a heat gun for a bit before I could stored to try. I'm itching to trim them, but I'd be INCREDIBLY surprised if they're ready for that step the next time I'm in.
Labels: Pottery