I've been playing around with the general lantern structure I've used before. My husband was wondering why the ones I'd made previously only had cutouts on two sides out of the four. Since I was cutting so much out of two of the sides, I wanted to make sure that there was enough structural support to make sure the lantern would survive the firing process while remaining upright. 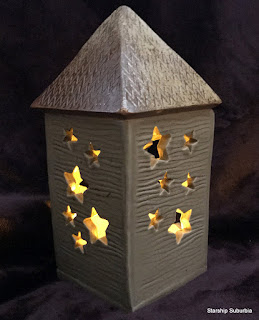 I like the natural look with the stars, but I think there's some room to play around with a more whimsical glazing option. I'm pretty sure I'm going to rebuild this lantern in the future so I can test that out.
Labels: Pottery