The other week my kid had a break before the start of the school year, so we took the time to be tourists in our metro area. Earlier in the week we hit up the Sculpture Garden, so for our next outing, we decided to meet a friend and her twin toddler sons at the Minnesota Zoo.

The weather wasn't as cooperative as it could have been. The forecast of "stray storms in the afternoon" translated into a steady, all-day drizzle with only a few breaks. Too bad we listened to the forecast.


Since nobody really was in the mood to get soaked, we hit up the inside stuff. First up was the aquarium. 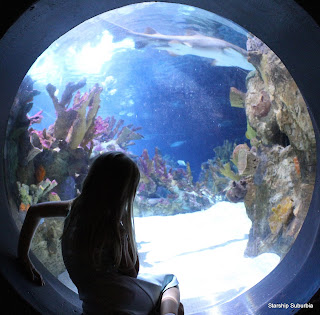 When we'd had our fill of fish and other things that swim, it was still raining. At least there's other inside stuff. We hit up the Tropic and Minnesota trails, and that's the point where I want to brag on my kiddo. I had forgotten what it was like touring with a toddler who is just discovering free will. They move fast. Hurray for my kid, who is much better (and faster) and grabbing an escaping two-year-old than I am. Twin A ended up doing most of his sightseeing hand-in-hand with my kiddo, while Twin B stayed firmly attached to mommy (by his preference).

By the time we'd finished all the indoor stuff, the boys were ready to leave. Naptime was fast approaching. It didn't look like the rain was going to be letting up soon, and the kiddo and I really wanted to see the kangaroos, since they were only going to be around for another few weekends.

At that point, I decided it was worth the extra bit of money to shell out for some ponchos, so adorned in vinyl, we ventured outside. We splashed over to the kangaroo exhibit, read the list of rules, and went inside. 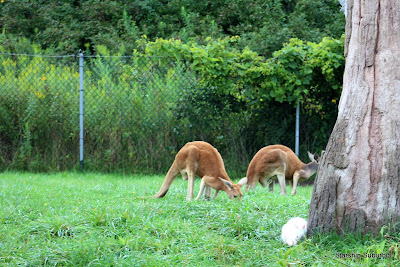 Kangaroo Crossing had a path that meandered through the exhibit, and the kangaroos (and wallabies) roamed free around the visitors. Pretty awesome. We got a little more up-close and personal than expected when one kangaroo quickly closed the distance, firmly grabbed Miss Mads' poncho with both arms, and began licking it.

The list of rules mentioned nothing about what to do if a kangaroo starts licking you. Naturally, the zookeepers who were stationed within the exhibit were fairly far away from her. Miss Mads was moving from surprised and amused to a little nervous, and I was worried about the kangaroo ingesting some of the plastic, so I pulled the poncho out of the kangaroo's grasp and we slowly backed away.


Afterwards, we laughed. After all, there were more kangaroos to see!

By the time we finished walking through the exhibit, we were pretty over being rained on. It was cold, it was damp, and Miss Mads' energy was gone. That was our signal to head home.

The kiddo fell asleep in the car within 15 minutes of leaving.