Why Do We Fall?

Pottery can be unpredictable. You shape the clay and you apply the glaze, but so much of the process that makes the piece what it is happens out of your hands. It's good therapy for people who don't like letting go, because you can't really go into the kiln with your piece.

So, sometimes your stuff fails. It really bites.

Awhile ago I wrote about some pieces in the early parts of the process. I don't usually do that because of the unknown factor, but I was pretty excited about the potential that was there. Here's the epilogue to that story.

The covered container in the top right is still in process. It's been trimmed and bisqued and came through wonderfully. Right now it's hanging out until we do a raku firing. I like to live dangerously. As for the platter...

When I removed the leather-hard chip and dip from the bat, I noticed a little s-curve that was forming in the bottom, but it disappeared after trimming. The thought I had then was "that worked well". What I should have been thinking was "I should probably keep a REALLY close eye on this". 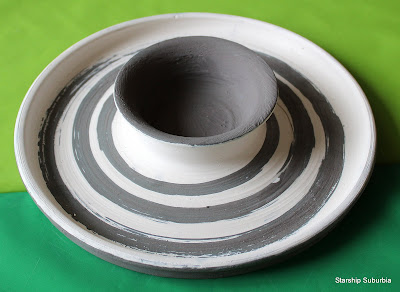 Here it is after it came out of the bisque kiln. Looks fine, right? 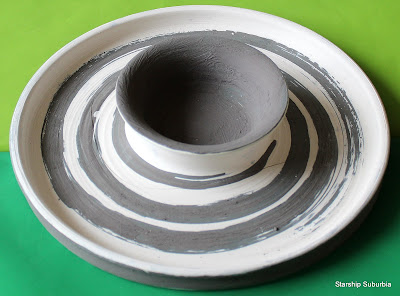 Here's the other side. Looks fine, right? No, wait. There's something there. Is it a hair? 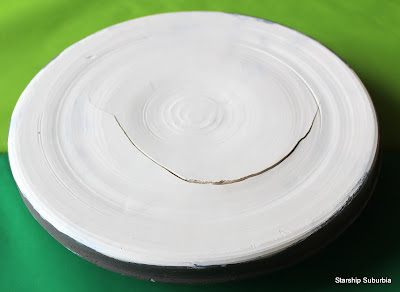 NOPE! HUGE S-CRACK! Yeah. That's the bottom. It's hard to tell, but it goes ALL the way through.    The volume of a piece shrinks each time it goes through the firing process. If I was to put it into a Cone 10 firing, chances are it would get even bigger. Unfortunately, it's the end of the road for this one. I'm going to use it as a desk organizer, because apparently I like sticking my failures right in my face. 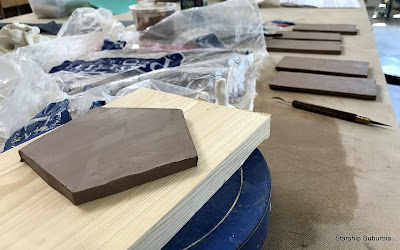 Then there was this one. This picture was before I had assembled it. 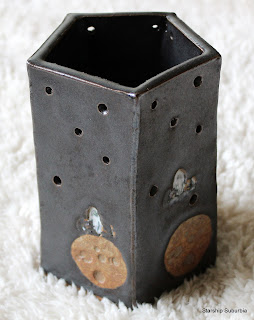 Here's the after. The idea is that each of the 5 sides were identical, except for the spaceship that would get higher in the sky each time. It kinda shows that, except that I either put WAYYYY too much of the Cushing Black on or didn't get all of it wiped off the space ships. Since some of the star holes are also glazed shut, I'm leaning towards the former.

Yeah, so anyone want a free lantern? It shows a spaceship being eaten by the darkness. It's probably symbolic of something or other. Serious offer. First person who asks gets it (provided I can actually get it to you)! Starshipsuburbia at gmail dot com!

Yeah. So to quote Alfred (the butler), why do we fall? To get back up again. I've thrown another chip and dip (along with the cake platter I was first trying to make), and I'm going to dry them slowly, this time. I haven't started on recreating the lantern, but I know what to do differently.
Labels: Pottery