Part One can be found here!

The various keeps and buildings of the Tower circle around the center point - the White Tower. The wooden staircase leads up to the entrance. If you look closely, you can see the top of a doorway mostly obscured by the staircase. 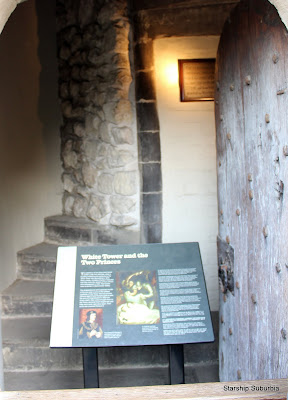 Inside that visually obscured doorway is a blocked off staircase. If you able to follow it upwards, you would be led to the Chapel of St. John. This staircase is where the skeletons of two children were found in 1674.

The 2 sons of the deceased King Edward IV, heir Edward V (12) and Richard (9) were taken to the tower by Edward IV's brother in April 1483 for "safekeeping". A few months later, Edward IV's brother declared himself King Richard III, on the basis that the two sons were illegitimate, and the two princes were never really seen again, which was in no way sketchy.

Anyway, when the two skeletons were found, the assumption was made that they were from the missing princes, and were reburied in Westminster Abbey. In 1933, forensic examination declared the skeletons were of children aged 12 and 10 years. Since then, attempts have been made to get support to re-exhume the skeletons for further testing with more current methods, but there hasn't been enough interest.

Inside the tower, there's been structural updating, mainly for preservation, I believe, but little peeks of the older structure can be found. This peekaboo shows the floorboard from 1732.

Inside the tower is what the guidebook declares to be the "World's longest running visitor attraction": Armored figures on horses, which have been shown in theTower of London for over 350 years.

The idea of displaying royal armor dates back even farther. Queen Elizabeth's head was hand carved in the 1780's for use with the display of her armor.

The second floor had displays of items from the various institutions which once operated in the tower.

This is one of the "Norman Drains" - the original drains used to move rainwater off the roof. The earliest it could have been constructed was 1100.

This model dates to 1842, and shows many buildings which are no longer there.

Eventually, the flow of the building directs visitors down to the basement level. At one point in time, it was a place of torture. Now, it has some exhibits on various weapons and a gift shop.

This well is also in the basement - it's the original one for the tower.

More to come!
Labels: Away Missions