Handbuilding a Mystery Part 2: The Resolution 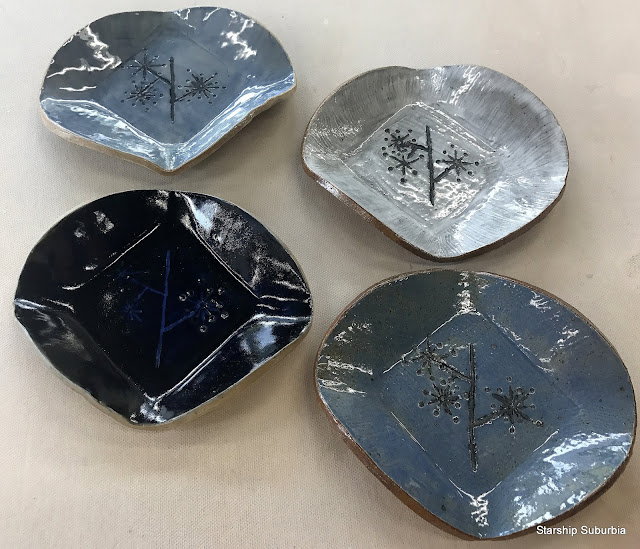 A little bit ago I posted about a bit of a mystery I had regarding the warping of some plates in the kiln (http://starshipsuburbia.blogspot.com/2017/05/handbuilding-mystery.html). I'm not really one to leave things as a mystery, so I consulted my old friend from school - experimental design!

To further test things I used the same blue slip and decoration method as before, as well as the same two glazes (Robin's Clear and Blue Ice) and firing method. The goal was to use the same formation method, but I ended up having to use a different plaster form for forming the sides. The reality of working in a shared space is that sometimes communal tools play hide and seek.

The one big difference was shaking up the clay bodies. I'd purchased a bag of Fire Clay to play around with, and wanted to see if made any difference in holding the desired flat bottom of the plate.

I made 5 plates. 4 turned out. This is the point where you imagine a dramatic fanfare to increase the tension.

All was good with this plate, aside from some weird wobbling with the carved design. The porcelain slip painted on the face of the plate should have been thicker, since it went more translucent during the Cone 10 firing than I anticipated, but at the same time I do like how it reveals the brush strokes. I'm so glad I painted it on neatly.

No warping, all good.

This one had Blue Ice, but it behaved.

This is where it gets interesting. Using Blue Slip (but not blue ice), it behaved.

At first glance Plate 5, which was a Fire Clay plate with Blue Slip glazed with Blue Ice, seemed to have come out the firing without issue. The bottom looked good, with no warping. Then, I noticed that the plate had a crack from the corner of the flat part to the edge of the plate on the points of each of the longer ends. Those had *not* been present earlier in the process. Doh!

The early hypothesis had been proven true, however. Something about the way that the glaze and the *blue* slip move together in the firing process puts too much stress on the clay.
Labels: Pottery