The Twin Cities metro area is home to so many great Sci-Fi/Anime/Fan Conventions. Now that we are back in the area, we're able to stop in and experience some of them without having to commit a full weekend and 14ish hours of car travel. Yay indeed.

Once upon a Thursday night, Miss Mads and I were talking about meeting some friends at a convention that coming weekend. Somehow, the idea of her dressing up as Rey got brought up and enthusiastically championed by a certain small person.

The sane response would have been to say that making a costume from scratch in about 24 hours wasn't really realistic.

I won't claim to be completely sane. I will, however, claim to have watched entirely too much Project Runway.

The second we got home, I begged Dr_Co to take over the ritual of getting Miss Mads ready for bed, then ran for my tape measure. Child measurements were obtained; I got to work.


Since a trip to the fabric store would have to wait until morning, I used the night to plan, sketch concepts, make simple patterns, and figure out how much of various things were needed.
Friday Morning: Gathering of Supplies

I took a peek in the bin of outgrown clothes, and did not find a pair of gray leggings. Doh! Trip to Target added to the list. Once Miss Mads was dropped off at school, I zipped off to gather my list of supplies.

In Target I was able to quickly find a pair of cheap gray leggings. Feeling lucky, I did a quick swing by the toy section to see if there was either a stuffed BB-8 or a replica of Rey's staff, but no luck. In the spirit of trying to keep this costume cheap (and despite the best efforts of my brother, with whom I was live-texting the whole crazy endeavor), I opted to skip the $80 dollar remote control BB-8.


At Jo-Ann's, I found a great leather-look fabric for the belt and pouch, along with a gauzy tan fabric. The only wrinkle was in the knit for the top. All of the whites were too white, all the grays were too dark, and all of the off-whites were too similar in color to the gauzy fabric.

Eventually, I settled on a white and was taking a peek over in their crafts department to see if there was anything over there that could be used to add on to the costume when my cell phone rang.

Miss Mads' school was on the phone. Despite the fact she was feeling fine and bouncing off the walls earlier in the day, she was now running a fever. Khaaaaaaaaaaaaaaaaaaaaaaaan!

If I hadn't already had my fabric cut, I would have taken that as a sign that I should give up on the whole thing. But, for better or worse, there was no stuffing the fabric back on the shelves, and I decided to forge on! Time to pay, grab the kid, and go home.

Side note: you might be able to tell that the specific Jo-Ann Fabrics I selected is partially staffed with geeks when the person checking you out is able to guess what you're making solely by the mix of fabrics.

I got Miss Mads home and chilling on the couch. The high energy of before had indeed devolved into a desire to sit and veg, so I let her pick a movie and, lacking the desire to see The Little Mermaid for the 57th time, got to work.

In the interest of time, there wasn't a lot of nice finishing done, at least on the shirt and pants.  On the shirt, I just serged the side seams, leaving the sleeves, bottom hem, and collar all unfinished. In fairness, though, Rey's not exactly living the high life on Jakku, so having the shirt look overly neat wouldn't look right either.

The gray leggings were the easiest part. I cut them off just below the knee, then hemmed them up using a zig-zag stitch (to prevent seams from unraveling).

The pouch/belt was the the most time-consuming. Making the pattern had been a quick effort of geometry, but it ended up having 13 different pieces, and sewing them all together took longer than Kylo Ren's morning hairstyling routine. 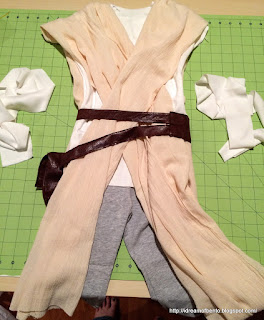 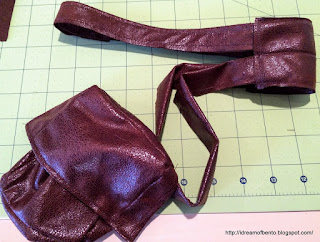 Out of all of the pieces, I was the most happy with the way the belt and pouch turned out. The belt around the waist has a velcro closure. I ended up top stitching on the belt to give it a crisper and more realistic look.

I finished fairly early in the evening, which was a heck of a lot earlier than I thought I would. Unfortunately, though, it was after Miss Mads had been tucked in for the night, visions of lightsaber battles dancing in her head. Throughout the day she had tried on a few of the individual elements, but the whole thing would have to wait until the morning.

The question was, though, would she be able to do the convention?

Through the power of the Force (or a good night's sleep), Miss Mads was feeling much better in the morning, had no fever, and was up to a day of fun.

And a cuter Rey was never seen.

Miss Mads had a great time dressed up as Rey. There were a number of compliments on the costume, and considering the short time frame for creation, I was more than pleased.

Is it perfect? No. There are some things that I'm going to tweak before Miss Mads wears this again.