I managed a new milestone, size-wise.

There's a gentleman at the studio where I throw who specializes in large, beautiful bowls. Of course, he's self-deprecating about his skill, saying that he does them really well only because they're the only thing he does.

With his coaching, I was able to throw the largest bowl I've done thus far.

In the picture, it looks as if it could be any size, but it's about 8 inches across at the top. True, it's not a ginormous bowl, but it's large enough to work as a serving bowl, which was just what I wanted. 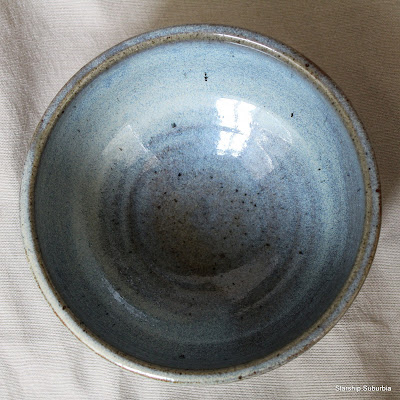 I really enjoy how the Ishi is transparent enough to let the iron speckling through. It gives a nice bit of interest to the bowl.
Labels: Pottery