A year ago yesterday, we found out that our offer on the Starship Suburbia was accepted. It was relieving - while it had been a few months since Dr_Co had received news of his post-residency job offer, this event made the whole thing seem real. We would have a place to live.

It also signaled a turning point in my life. I would have to accept living in the suburbs.

I'm a city girl. Well, to put it more specifically, I'm a "population center" girl. Throughout my life I've lived everywhere between a large city and a small town. With the exception of three years when I was quite small, I've always lived somewhere I could walk to at least a few things. This was true even in my first post-college apartment in a suburb.

But, Dr_Co's job would put us in an area of the metro where that wouldn't quite be possible, at least not if he was going to have a reasonable drive when he was doing cross-call. So, I made my peace with suburbia and added a new requirement for house hunting.

When I looked out onto the backyard, I had to feel as if I was in Minnesota. 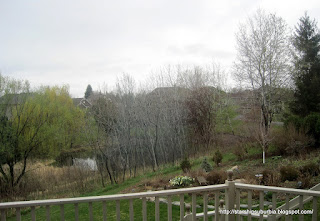 It's a gray spring day, but the snow is gone, and for that, I am thankful. 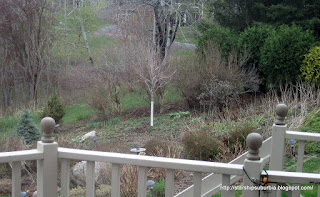 The green is returning, and it is ours.